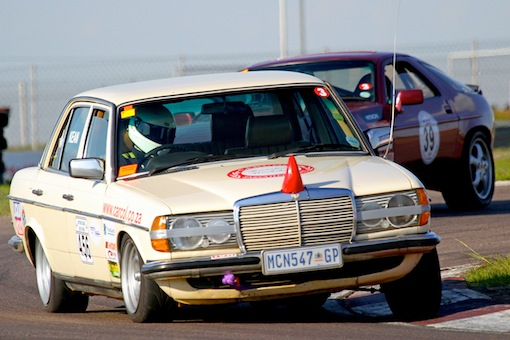 Charity begins at the racetrack. Well it did during the final round of the Midas Historic Tour held at Zwartkops Raceway last weekend. Always keen to try something different, the Greenside-based Mercedes-Benz specialists, Carcol Executive Auto, decided use the 2.4-kilometre circuit as a platform to help create awareness for Rhinose Day: a public fundraiser held over the last three months of the year to help raise some much-needed cash for the fight against rhino poaching in South Africa.

Yep, showing their support for the most endangered member of the Big Five, Carcol ‘factory’ drivers, Colin Kean and Stuart Grant, strapped giant red plastic rhino horns to the radiator grilles of their classis Mercedes-Benz 280E race cars. Stuck without a ride for the weekend and eager for a slice of the asphalt action, I joined the Greenside duo in a rather special 230E.

How special? Well considering that it now has nearly 800 000 kilometres on the odometer, I’d have to say very. You see while most cars of comparable vintage have long been relegated to the scrapheap, this cream-colored zombie bellowed its way around the circuit with all the verve of a much younger model.

And thanks to some cheap and basic modifications (chopped springs and a set of well-scrubbed semi-slick tyres), I was able to pilot the old dear to a second place finish in the first Marques Car heat of the day. Unfortunately this unexpected success was thwarted during the second heat when my exhaust silencer decided to implode; a freak incident that strangled the engine and saw me retiring on lap two.

Luckily Kean made up for my mechanical misfortunes by clinching overall Marques Car honours behind the wheel of his ultra reliable 280CE coupe. The Carcol man also scored some additional silverware in the sweaty one-hour endurance race where, teamed up with the experienced likes of Grant, he came second in his class and second in the index of performance. “It was great day’s racing,” said Kean after prize giving. “What made it extra special was the fact that the team and I could help spread the word about Rhinose Day. And I think we really gave it horns!”